Adobe Photoshop has been the single real option in bitmap image-editing since the early nineties, but now there are some good competitors if you need to edit bitmap images such as photos, collages, or paintings. There were some graphics programs before too, but it was hard to recommend them to anyone. They either were too specific for a narrow purpose or simply not good. So then things started to change, slowly.

Let’s look at the mac side of things for now. Pixelmator was one of the first attempts. It was much cheaper, it was speedy, and it had many essential features. It was possible to use it as a basic editor, but the interface is the weak part for me. It all comes down to moments when I am using a mac that has Pixelmator, and I need to edit some images, I often would hesitate and eventually will have to switch computers because the other one has Photoshop installed. That is my personal metric – how much I try to avoid using a particular tool. If I do, then the tool is not good enough. So even though I was always trying other editors, I was getting back to Adobe tools.

The first actual switch came with Sketch from Bohemian Software. I used to do all interface and design things in Photoshop and Illustrator, and then boom, no more.

Sketch was better, faster, lighter, and at the beginning, even cheaper, much cheaper. It totally took care of all UI design imaging needs for me, and I use it a lot today. Later I also started using Figma. But both, Sketch and Figma are vector image editors, and I still need a bitmap image editor.

Then I found Affinity Photo by Serif. Also, at exactly the same time, Acorn by Flying Meat released a new version, and I gave it a shot. Finally, there were exciting options. Affinity Photo is a real deal, full-featured alternative to Adobe Photoshop. It’s totally on par with features, few things are not as good, but many features are done even better. Suppose you edit photos and create digital paintings. In that case, Affinity Photo is a great editor, and it’s mature enough to be the go-to app. And it is much cheaper than stuff from Adobe. You can buy it from the Mac App Store, pay once and install it on all your computers connected to the account. They even came up with a version for iPad that is just as good as the mac version. I am pleased with it. Yet, it still feels a bit too new for me, and because of that, I found that sometimes it’s easier to use Acorn. Version 6 is very well done. Long-time Photoshop users will find it very familiar and easy to use. It’s fast and great for all kinds of minor edits. In a way, if you don’t need sophisticated color adjustments and complex manipulations, the tools are even easier to use than Affinity Photo. Still, for my needs, Acorn has a big shortcoming - very poor image export format choice. Because of that, I often just can’t use it.

Affinity Photo has a competitor, too, Luminar from MacPhun. In a way, those two are more alike to each other than to Photoshop, Acorn, and Pixelmator. Yet while they are more similar and comparable for photo editing, I find Affinity Photo is noticeably better when it comes to painting. 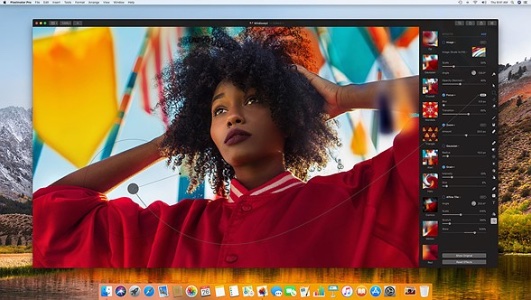 NNow we have one more contender for the Photoshop replacement crown. Pixelmator Pro. It’s too new for me to really judge it. Still, it seems to be a solid competitor to both Affinity Photo and Photoshop from the description and initial impressions. I am sure that there will be few rough edges in the beginning, but I hope they will be polished pretty soon. Thus it’s great news for users.

Lack of real competition stagnated Adobe for a long time, and now they will start to improve faster and in more ways than before.

Adobe has a very strong selection of tools, Photoshop, Illustrator, XD and many many others offer it as part of the Creative Cloud suite or one by one. All of them are high-quality tools, but for me, Adobe’s offering has few downsides: The price of the subscription is a huge thing that always in the air. The other thing that really alienated me was the way they handled the cancellation. I was a subscriber for many years, and one day I thought I am not using it a lot. I have old versions. Why don’t I just cancel it for a while and see how it goes. But it turned out not that easy. My subscription was annual but was paid monthly and had auto-renew. The combination of those two settings made me unaware that if I want to cancel and not lose money, I have to do it exactly on a particular day. Adobe was happy to inform me that I will have to pay $300 just to cancel. That moment it was clear – the subscription model, especially the way Adobe has chosen to use it, does not work for me. But that is for Creative Cloud. I still have purchased the Creative Suite version, and luckily it still works. So I actually sometimes use it.

Affinity Photo is a great editor, has Windows and iPad versions, has a vector counterpart Affinity Designer (there are even some promises of DTP Publisher). A downside for me is the learning curve. I still have to look up and investigate how to do certain things. Current version 1.6* is an improvement, and they seem to continue working hard. Serif also offers lots of great tutorials.

Acorn 6 is a great lightweight tool, but the lack of image format support and few other missing features makes it hard to use as a full replacement.

Pixelmator is a friendly little tool. If you don’t have other editors, it’s possible to use it and get things done. It can even edit vector images too. But the interface is lame. That is addressed with Pixelmator Pro. I got it. I will be trying to use it too. Let’s see how it goes, I think they have good ideas about UI, and some of them will even be adopted by others.